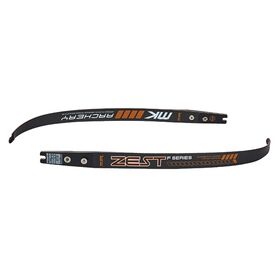 We’ve made the carbon lighter and increased elasticity by applying ultra-high-density production which is the latest carbon processing technology of M.K.

Through the development and usage of highly concentrated epoxy that is optimized to feature of the limbs, the response to environmental temperature change, impact resistance and elastic restoring force of limbs that occurs while shooting has been improved effectively.

The ZEST was created through various tests.

In order to improve problems regarding limbs, (including lowering pounds through various temperature and humidity changes) we’ve checked and had various tests such as dry fire testing, harsh environment testing of 100℃, etc. As a result, we’ve secured a highly consistent technique of pounds under any circumstance.

The ZEST, which is applied with a new production technology, it has a high consistency of pounds and has higher durability than MK’S existing limbs, so it gives users a great feeling of satisfaction as well as it provides users with a constant shooting feeling without changes in pounds.